Open spaces: the Industrial Age of the 21st Century?

If Facebook, the $300B company is building the “biggest open space in the world”, they have to be doing something right? Right? Wrong… Why? Because productivity.

In January of 2010 I was traveling to Silicon Valley. It was my second trip to this “Mecca” of startups. I was just about to celebrate my third year running my own small productivity company, Nozbe, and my friends from Codility invited me to join them on a trip to the Valley and visit some of the best companies in the world. It was so great. To me personally, visiting different offices was so much fun. Just seeing how the best of the best organize their work and get stuff done was eye-opening. But my eyes really popped out when I finally visited the offices of Facebook. I saw this: 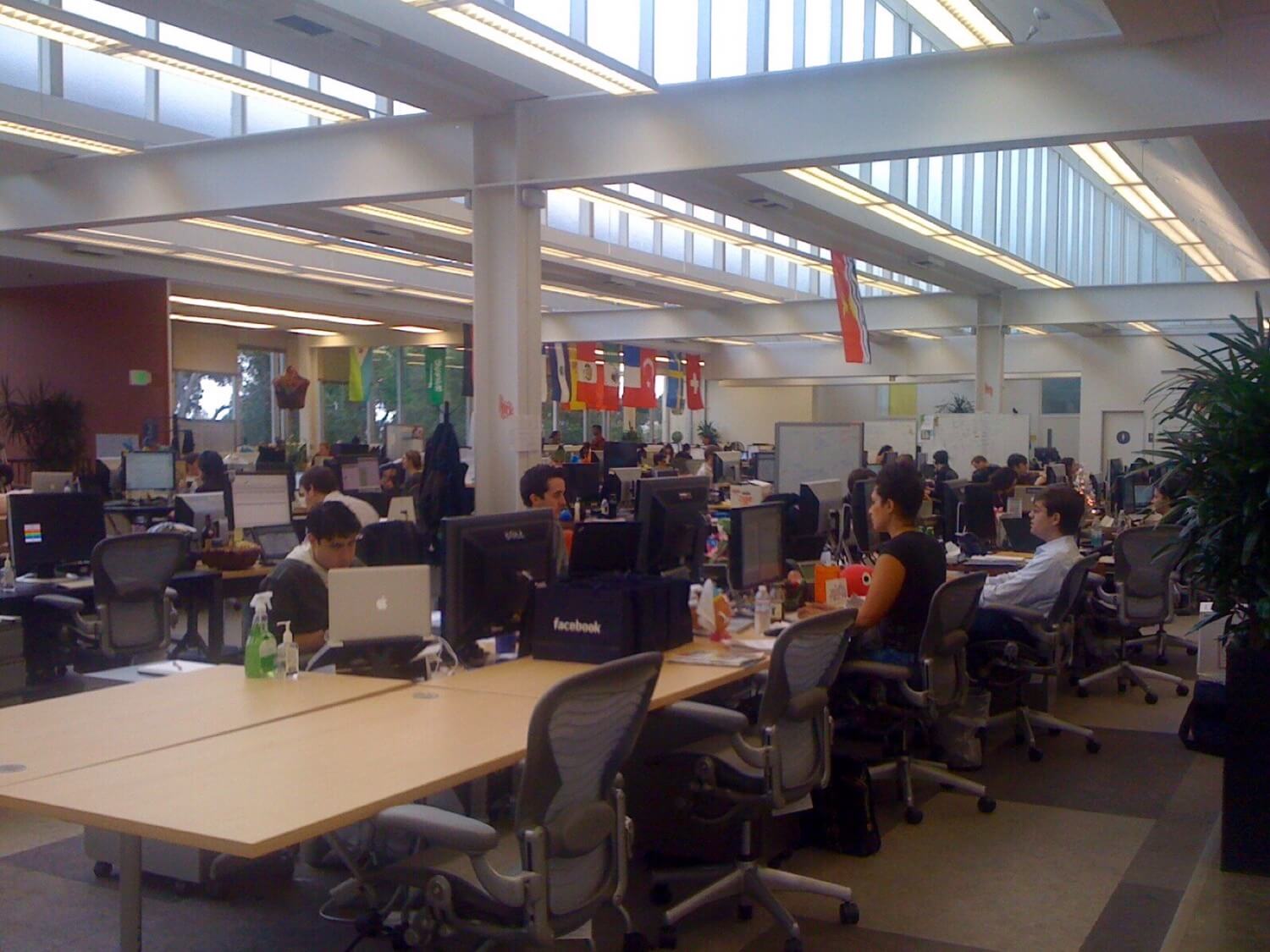 Industrial Age of the 21st century…

I was in the office of the most successful company in the Silicon Valley. That same company that was growing like crazy and “aqui-hiring” the best and most talented small software companies in the world. They were famous for hiring or getting the best engineers around…

And then they put them in that office. Seriously.

It was a huge “open space” where everyone would sit next to each other like workers in the factories of the Industrial Age in the 19th century. Yes, they’d give them the best tools of the 21st century, like iMacs, screens, chairs… but then they’d just cram them next to each other.

And they’d expect them to do their best work.

Expecting people to get something done here, right?

Best people, best equipment… in the worst kind of office?

I remember my shock. There I was, thinking, “but what do I know, right?”, I mean, I’m here at one of the best Silicon Valley startups, right? They must know something I don’t know, right? I mean, I’m just this small company from Poland, which has no office. Like, none.

At that time we were only three people: Tom (CTO), Delfina (Support) and me (CEO). And we all worked from our homes in Warsaw and Torun in Poland. So what do I know?

Well, all I knew was that working from home gave me flexibility to work anytime and anywhere. Mostly at home where there was peace and quiet as my wife was off for work. I was basically home-alone getting my small company off the ground. Using the Internet to communicate with the rest of my three-musketeers team :-)

But maybe I was doing it wrong?

I was confused, but this didn’t feel right to me.

Over the years I’ve tested many ways of working. I usually work from home, but sometimes I switch offices. I visit friends. I ask around. I talk to people. I read some books by people smarter than me:

“After all, your folks are intellect workers — they need to have their brains in gear to do their work, and noise does affect their ability to concentrate.” Peopleware

That’s the thing. That’s the core of productivity. We don’t need just more time. We need more focused time. And at Facebook, the programmers need it even more to get into “flow”:

Programming in the zone — or “The Flow” as it is known in psychology — deserves better understanding. Why? Because many developers share this experience and rage against environments that don’t support their desire to work in the zone. Psygrammer

Facebook is known for hiring the best programmers in the world. How do they expect them to perform at their best in an “Open Space”? 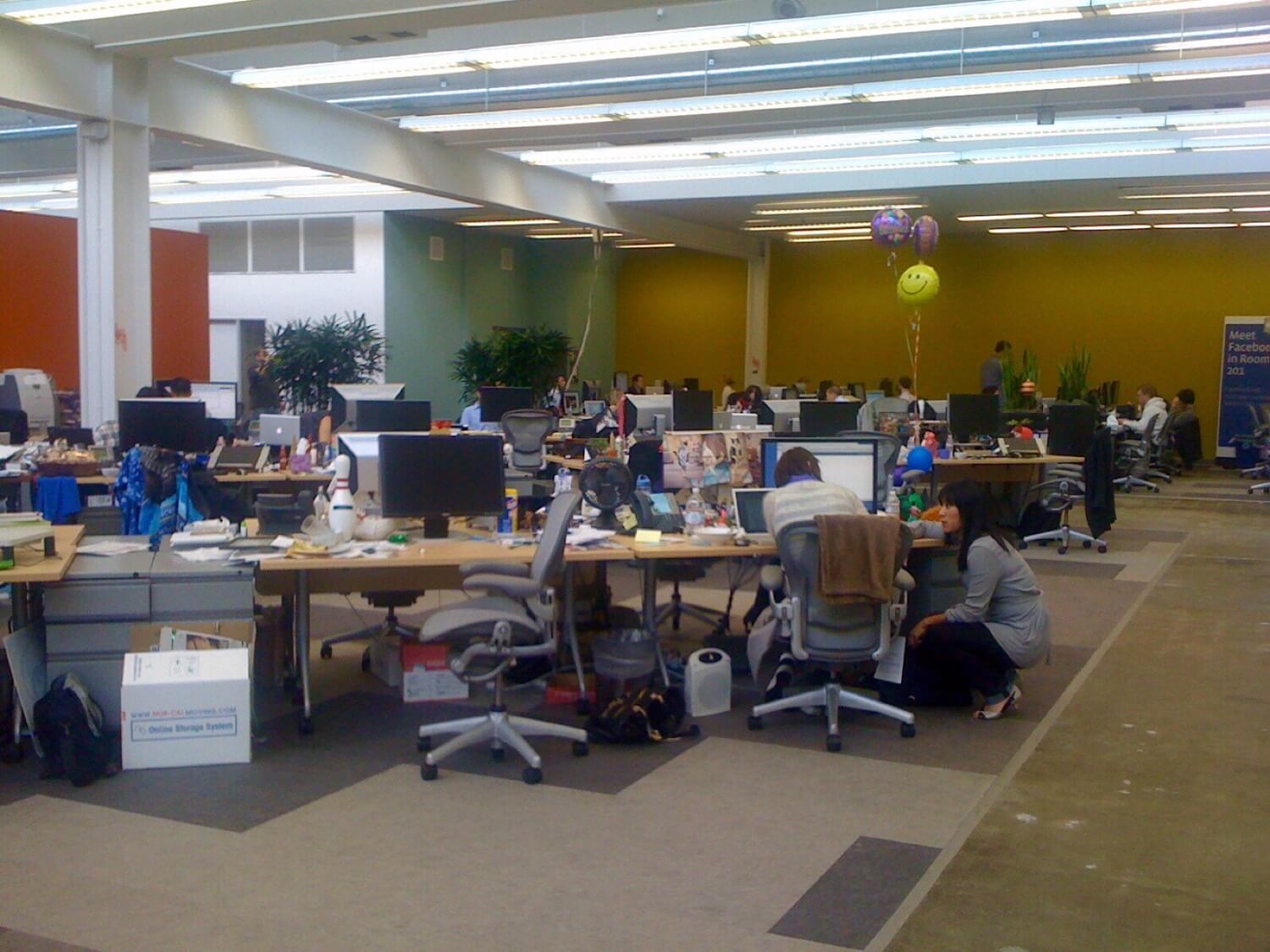 Well, Lindsey Kaufmann of Washington Post just wrote that “Google got it wrong. The open-office trend is destroying the workplace”:

As the new space intended, I’ve formed interesting, unexpected bonds with my cohorts. But my personal performance at work has hit an all-time low. Each day, my associates and I are seated at a table staring at each other, having an ongoing 12-person conversation from 9 a.m. to 5 p.m. It’s like being in middle school with a bunch of adults.

Facebook will have a new office now!… or will it?

After my visit to Facebook’s offices in 2010 and the shock of being teleported to the Industrial Age of the new millennium I was happy to learn that since then they moved to a new office, buying the old Sun Microsystems campus and commissioning a completely new place by the famous architect by the name of Frank Ghery.

The same guy who brought us the Guggenheim Museum in Bilbao, the Dancing House in Prague, or the Neuer Zollhoff in Duesseldorf. I visited all these buildings. They are a-m-a-z-i-n-g. Now he’s designing Facebook… to be the most “amazing”… and biggest “open space” in the world:

It will be a single room, stretching 10 acres, where everyone will sit in the open with moveable furniture. As Mark Zuckerberg says in his own status update, “It will be the largest open floor plan in the world,” housing over 2,800 engineers…

That’s it, Mark Zuckenberg is proud to “house” as many engineers as he can, giving him the worst office space possible designed by one of the best architects in the world in one of the most successful companies on the Internet. New definition of a “gold cage”?

And you’re laughing that in Nozbe we all work from home?

Today we’re 24 people at Nozbe. We all work from our 24 remote offices spread across 2 continents and 5 countries. And we’re growing rapidly. And we’re not even thinking of “getting an office”. We work anytime we want, from an office we designed and we feel best at… and working from home is the best.

We serve more than 300,000 happy users from all around the world by brining them the best productivity tool we can build… and we can pull it off with such a small team, because we get our focused time, we enter our “flow” or “zone” easily… and we trust each other to get our work done.

I’m the CEO and I don’t need an “open office” to make sure my team is busy working. I know they are. I trust they are. And I see the results of their work every single day.

To me, my company is a true example of a real 21st century company.

Working remotely or having private offices that fit our lifestyle and help us worked in a focused way, leveraging the latest Internet tools and letting us enjoy fully flexible working schedules is how we’re supposed to work at the Information Age. Let’s leave the Industrial Age in the past, shall we?

P.S. If you’re interested, we discussed this a little deeper with my co-host at “The Podcast”.

« Remote worker’s luxury: changing offices for different tasks and better productivity There is no office… »